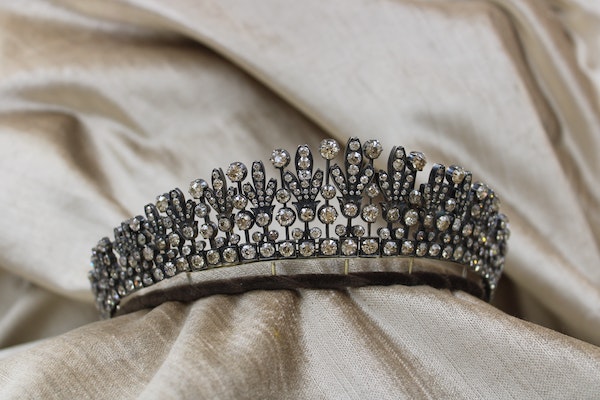 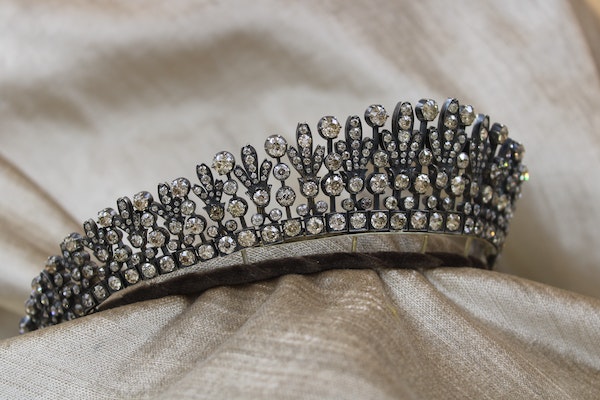 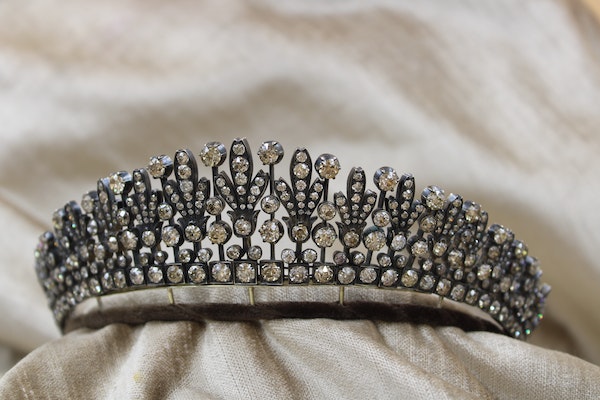 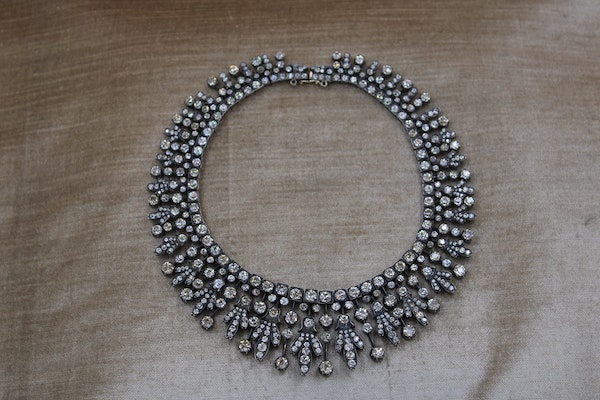 A stunning late 19th Century Diamond "Kokoshnik" Style Tiara which also converts to a spectacular Diamond Fringe Necklace. This Tiara - Necklace has been elegantly constructed in Silver tipped 14ct. (marked) Rose Gold and is set throughout with four hundred and ninety-four (494) "Old Cut" Diamonds. The Silver tipping has oxidised with age and presents a startling back drop for the numerous "Old Cut" Diamonds. As a Tiara, the piece attaches to a tension and screw supporting frame with a fine velvet base. This beautiful and rare piece is accompanied by a newly customised leather case and an independent Gemmologist's report assessing the Diamonds as being of approximately 103 Carats (unweighed), I - J Colour & with Faint Brown Tint and VS - SI Clarity.. A "Crown" mark & 14ct. mark, (stamped) on the fastener, suggests that this exceptional piece is "Austro-Hungarian" in origin.

This is a rare opportunity to acquire a "Tiara - Necklace" of this calibre; these are so rarely seen on the open market. The fine 'Faint-Brown Diamonds, also resonates the Diamond colours found and seen within the many celebrated Royal and Aristocratic jewellery collections of the 19th Century; high colour & clarity Diamonds had still not emerged in any great number during this particular period.

The inherent beauty of this unique "Tiara - Necklace", with its striking Diamonds adorned, combined with the exceptional craftsmanship makes this a truly extraordinary piece of jewellery.

Based on our research we have conducted, this "Piece" is likely to have been inspired by the "Queen Mary's Collingwood Fringe Tiara", given as a gift from Queen Victoria to Princes Mary of Teck upon her wedding (in 1893) to Prince George, later His Majesty King George V.

Since 1919, The "Queen Mary's Collingwood Fringe Tiara" has been adapted and modified (stylistically) through the various royal members who have inherited this Tiara. Currently the piece remains as part of Her Majesty the Queens Royal Collection of Jewels.

Robin Haydock a LAPADA member for over 20 years, is a renowned passionate collector and an established Antique Dealer.
Visit our website www.robinhaydockantiques.com (click on "Visit Instagram" below for our website link). Please do not hesitate contacting us for more information.