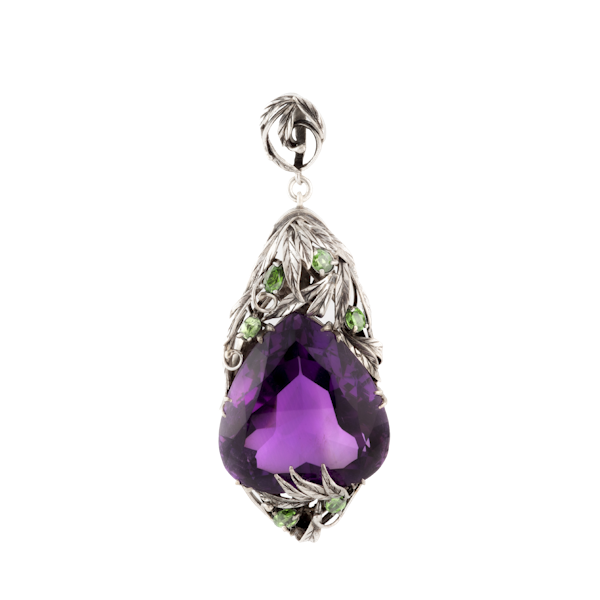 Edith Linnell originally intended to be a portrait painter, she successfully experimented with jewellery making in the early 20th century; her works receiving a medal and were purchased by the Board of Education for permanent exhibition at the Victoria and Albert Museum.

Her jewellery was naturalistic in design based on her years of study as an artist when she drew from nature. Her extensive travels throughout the world provided the perfect opportunity to source gemstones for her designs.

Originally based in the Burlington Arcade Edith Linnell later established premises at 188, Sloane Street; she also exhibited at the Arlington Gallery, 22, Old Bond Street and had showcases in Harrods and on RMS Queen Mary. The advent of the Second World War saw the end of her business when her Sloane Street premises were bombed during the blitz. The following items of jewellery were all designed by Edith Linnell, and remained in her family until the present day.

For more information or to purchase this piece online, please visit our website at www.eltonantiquejewellery.com

A family run business founded in 1976 specialising in the sourcing of rare and beautifully designed antique jewellery from Georgian, Edwardian and Art Deco eras. More recently we have been carefully selecting unusual pieces from the 50s, 60s, 70s, 80s and even the 90s. Members of Lapada and Cinoa.

A 1930s Onyx and Agate Bracelet

A Victorian Bloodstone Signet Ring from 1901

A Sapphire and Diamond Ring c.1903

A pair of Ruby and Pearl Drop Earrings

18 ct gold miniature of a Swiss Gentleman in enamel