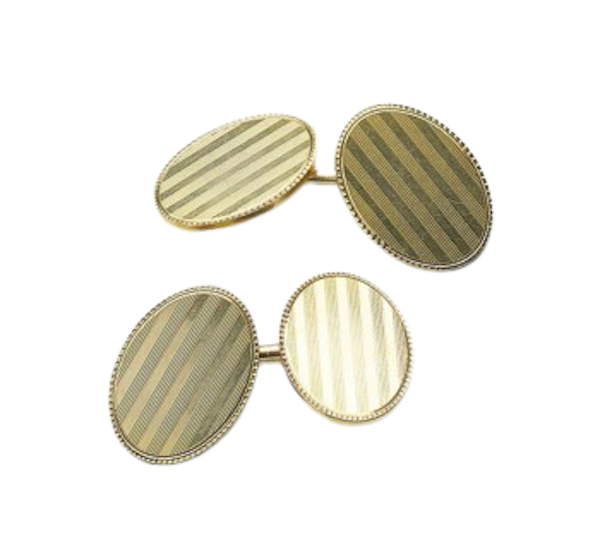 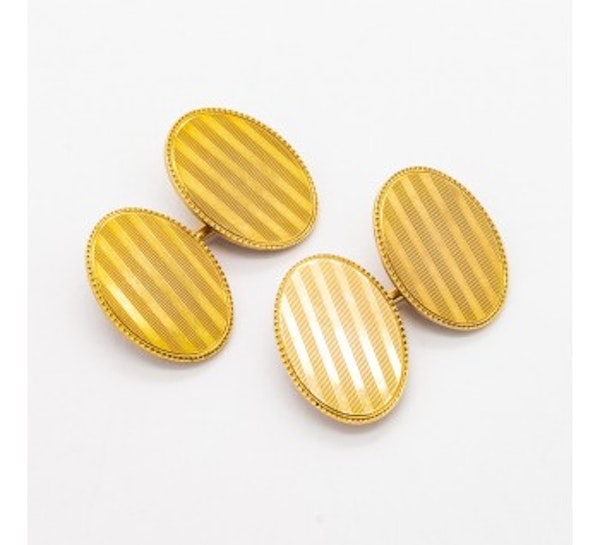 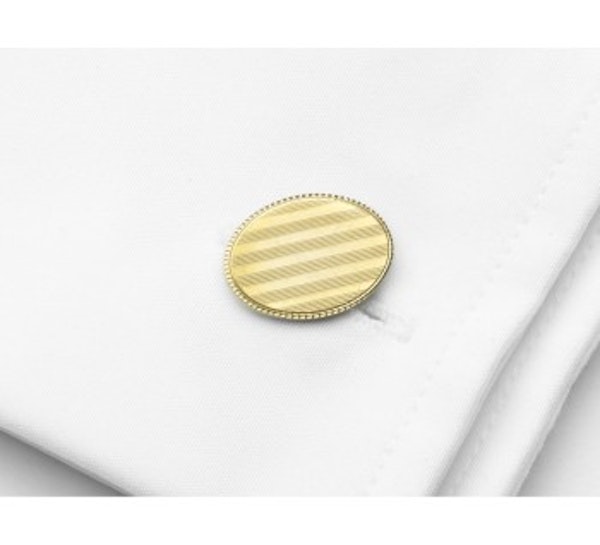 A pair of Bailey, Banks & Biddle gold, oval, engine turned engraved cufflinks, with a pattern of groups of parallel lines, with an indented surround, mounted in 14ct gold, with bar fittings, signed BB&B, marked 14k and 3, American, circa 1955.

Bailey & Kitchen was founded by Joseph Trowbridge Bailey (1806-1854) and Andrew B. Kitchen (died 1850), on 10th September, 1832, allowing Bailey, Banks & Biddle to claim that they are the oldest nation-wide jewellers in America. The business was established at 136 Chestnut Street, Philadelphia, PA.

The partnership of Bailey & Kitchen was dissolved by mutual consent in November, 1846. The business continued when Eli Westcott Bailey (the brother of J.T. Bailey), Jeremiah Robbins and James Gallagher formed a new partnership, under the name of Bailey & Company and operated the business at the same location until 1859, when they constructed a new building, at 819 Chestnut Street. In 1869 the company moved to Chestnut at Twelfth Street. In 1903-1904, they built a technologically progressive showroom and eight-story factory, at 1218-20-22 Chestnut Street.

Joseph Trowbridge Bailey, II (1835-1918), who entered the business as an apprentice in 1851, became company president in 1854 after his father's death, and was admitted into partnership in 1856. E.W. Bailey retired from the firm in 1866. On 1st March, 1878 J.T. Bailey, II, George Banks of J.E. Caldwell & Company and Samuel Biddle of Robbins, Clark & Biddle, formed a partnership under the new name, Bailey, Banks & Biddle. In that year the firm moved to 1218 Chestnut where it remained until 1953, when it established its headquarters on the corner of Chestnut and Sixteenth Streets.

Biddle retired in 1893 and Banks retired in 1894. On 2nd March, 1894, the business was incorporated as Bailey, Banks & Biddle Company, with J.T. Bailey, II as president; Charles Weaver Bailey (son of J.T. Bailey, II) as vice-president and treasurer and Clement Weaver as secretary. C.W. Bailey (died 1922) was the last in the direct line of Baileys to head the firm. He became president after his father's death in 1918.

At the turn of the 20th century, Bailey Banks & Biddle was commissioned, by the U.S. Government, to update the Great Seal of the United States. Its design remains the official version of the seal. The company also designed and made many of the military medals that are still in use, including the Medal of Honor, the Silver Star, the Bronze Star and the Purple Heart.

Finlay began as a mail order house for fine jewellery in 1887. In 1924, Abraham Hirshberg took over the debt-ridden business and expanded with Finlay-Straus stores throughout New York. In 1968, Finlay was purchased by Seligman & Latz, who operated Finlay until 1985, when it became privately owned. Finlay remained privately held until April 1995, when its parent, company Finlay Enterprises, Inc. held its initial public stock offering.

Finlay Enterprises announced completion of a bankruptcy auction, on 24th September, 2009. Bailey Banks & Biddle was relaunched as a private company by the current owners in the spring of 2010.