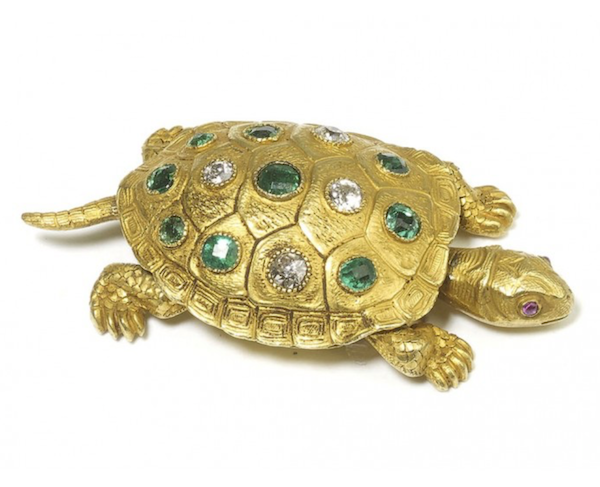 An Edmond Plisson, French, turtle brooch, with sprung moving head, legs and tail, set with cushion shaped emeralds and old-cut diamonds, in millegrain edged rub over settings, in the shell, mounted in 18ct gold, engraved to represent the shell and skin of the turtle, with cabochon-cut ruby eyes. With French eagle mark, for 18ct gold and Edmond Plissons maker's, a lozenge, with E P, with a cat sitting between the two letters. This mark was in use between 1885 and 1898. Plisson & Hartz excelled at making jewellery in the Art Nouveau style, as well as gold chimerical and animal designs. They were important French jewellers, and their history and examples of their work can be found in the Vever books on French jewellery, "La Bijouterie Francaise". Edmond Plisson's career began in 1872, when he and partner Bottentuit formed Bottentuit & Plisson. This company continued until 1886. Plisson directed the firm alone from 1886, to 1898, when he was joined by longtime associate Hartz, the creative force behind their designs. Plisson continued in the company until his death in 1904, at which time Hartz continued the firm as Hartz et cie. Jewellery firms began to create a variety of fantastical creatures, using the goldwork techniques developed, in France, during the 1870s and 1880s. Plisson & Hartz is thought to be the first to produce chimerical jewels, those of gold griffins and mythical monsters. Initially the public disliked the designs, however the taste soon turned and Plisson et Hartz' chimerical jewellery became extremely popular. The firm also embraced Art Nouveau themes, such as female and flower forms and the mermaid motif. They later introduced gemstone set jewellery, including diamond animals and designs depicting baskets of flowers in a variety of stone and enamel settings. Edmond Plisson's maker's mark was a cat, sitting between and E and a P. Plisson & Hartz' maker's mark was a cat, sitting sideways, between a P and an H. Hartz et cie's maker's mark was a cat, sitting sideways, below H&cie.
Period

Edwardian sapphire and diamond "all around" ring