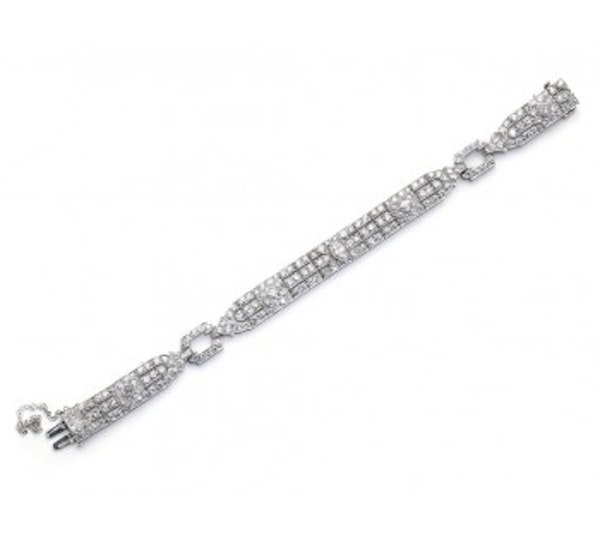 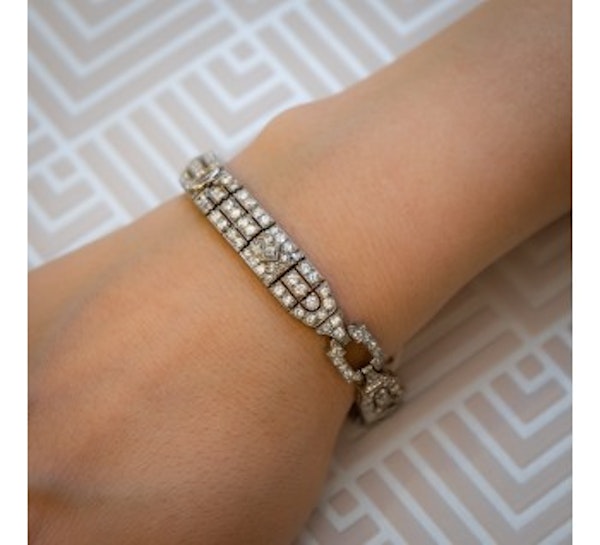 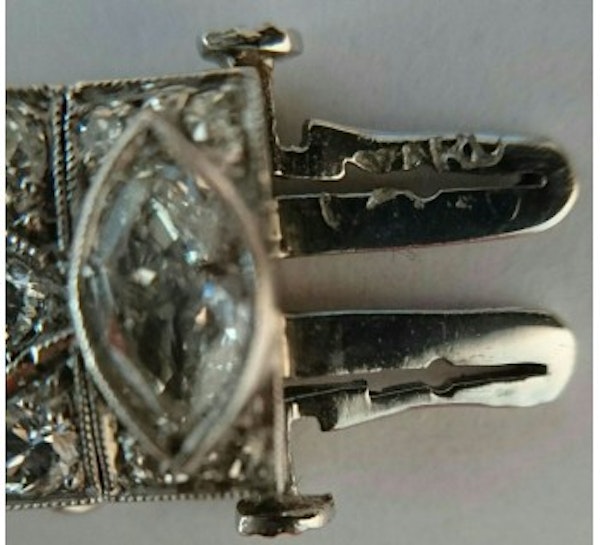 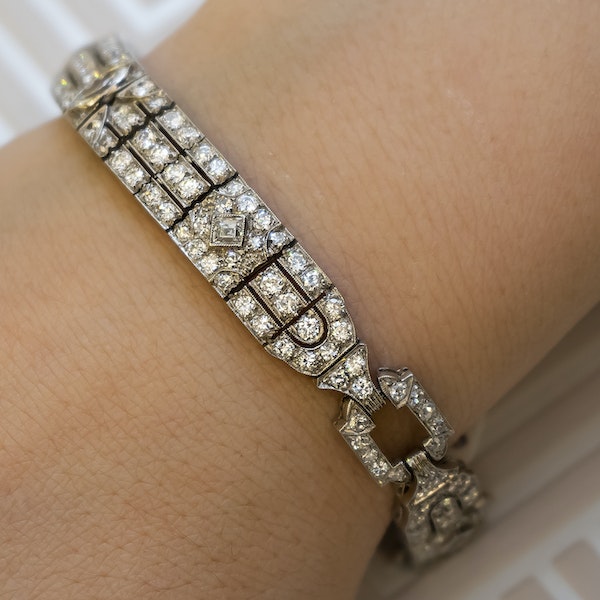 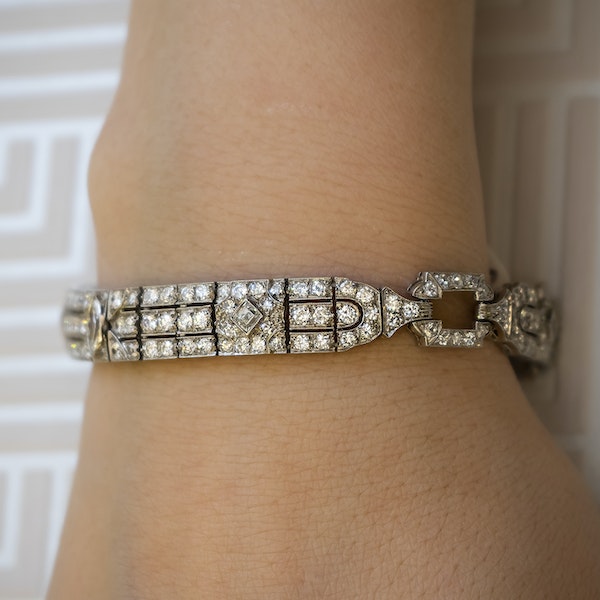 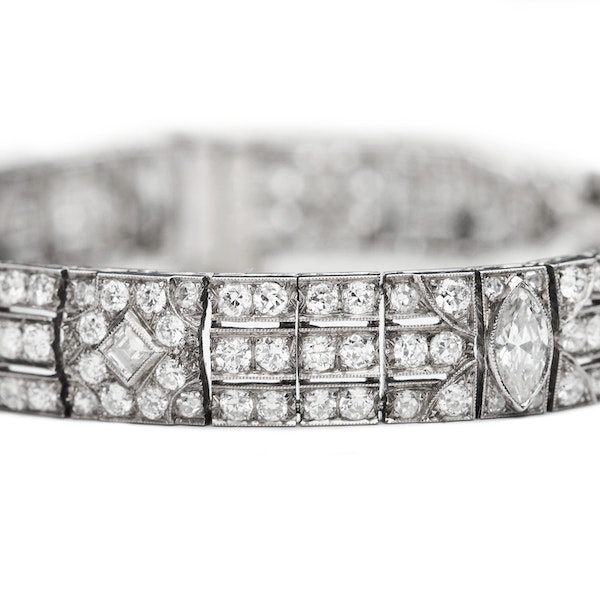 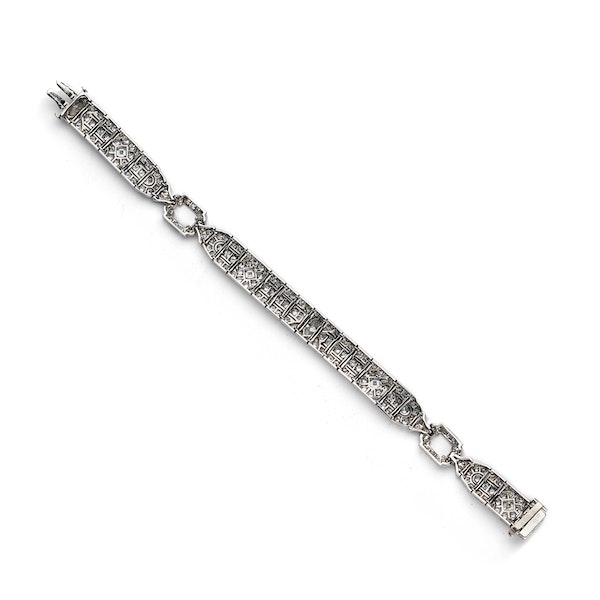 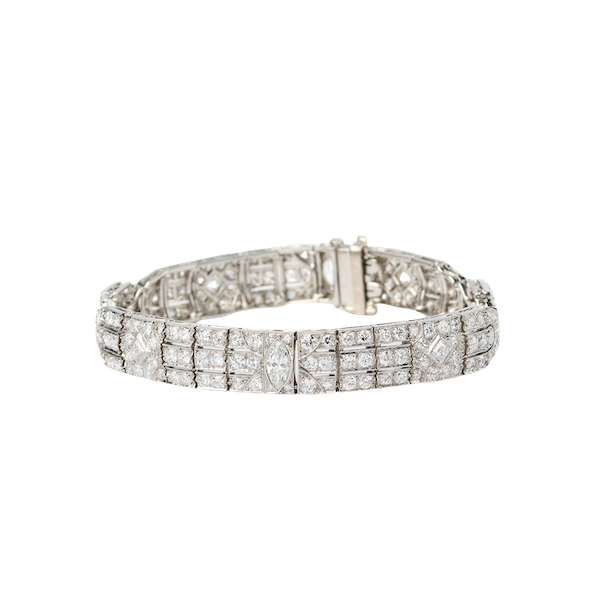 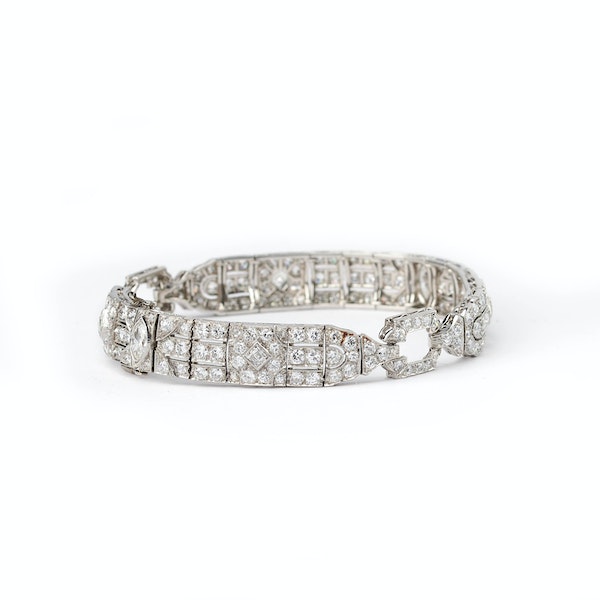 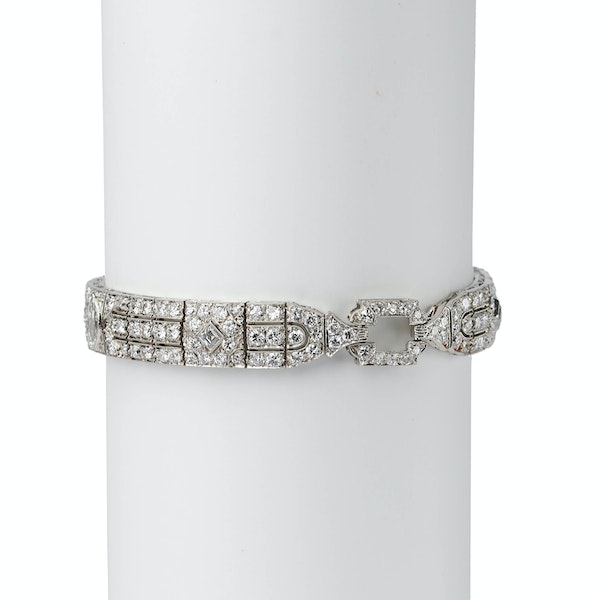 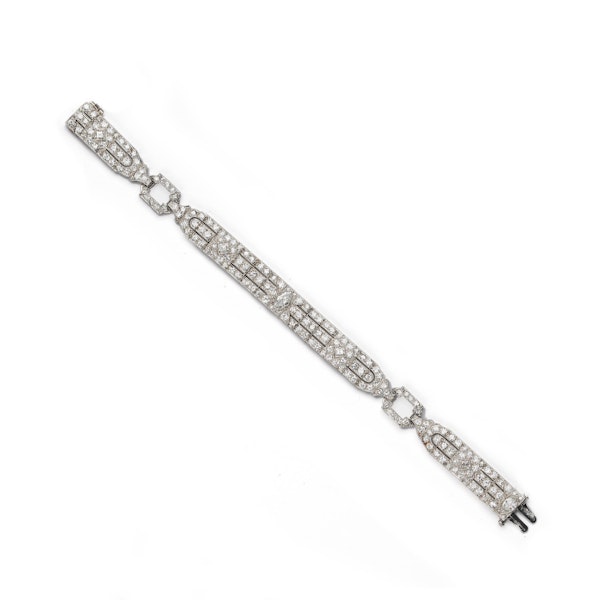 An Art Deco diamond bracelet, by Raymond Yard, featuring two articulated panel sections, with straight sides and curved ends, with a marquise-cut diamond, rub over set, in the centre of each, flanked by old-cut diamonds, in grain settings, forming three rows, with air gaps between, with four further square sections, in the articulated panels, set with square-cut diamonds, in rub over settings, with old-cut diamond set decorative surrounds, the panels are connected by two, rectangular, openwork diamond set links, mounted in platinum, decorated with millegrain edges, signed Yard, stamped 10% IRID, circa 1930. The approximate total diamond weight is 10.00ct.

Raymond Yard began his career in the jewellery trade, in 1898, at the age of thirteen, working as a doorboy, at Marcus & Co., New York. His is a rags to riches story. When training at Marcus he took jewellery evening classes. He took up pearl stringing for the company in 1902. In 1906 he was promoted to Salesman, working his way up to become General Manager. Yard gained the admiration of John D. Rockefeller, Jr., who recommended him to his family and friends and encouraged him to open his own firm in 1922. He used the highest quality diamonds and coloured gemstones and specialised in platinum mountings, developing a distinctive style, with an Art Deco theme. In the 1940s platinum was in short supply so Yard adopted gold and a wider variety of gemstones for his designs. He returned to platinum in the 1950s and utilised gold mountings imported from France. In 1958 Raymond Yard retired, leaving his firm to his protégé Robert Gibson, who had started as Yard's golf caddy, in 1937, at the age of seventeen; Glen McQuaker, who had also caddied for Yard and Donald Bartow. All three had been long term employees of Yard. In the 1960s the firm moved to 580 Fifth Avenue. Selling a combination of new and classic designs the company prospered. More abstract modern designs were adopted in the 1970s. Robert Gibson retired in 1989, after a 52 year career and the firm was passed to his son, Bob Gibson. Under his leadership the Yard tradition continues, reviving some of their most successful designs. Yard no longer has its own store, selling through Betteridge, in Connecticut.

With thanks to the Raymond Yard website, Lang Antique Jewellery University and the Amazon introduction to the book Yard: The Life and Magnificent Jewelry of Raymond C. Yard, by N. Natasha Kuzmanović.