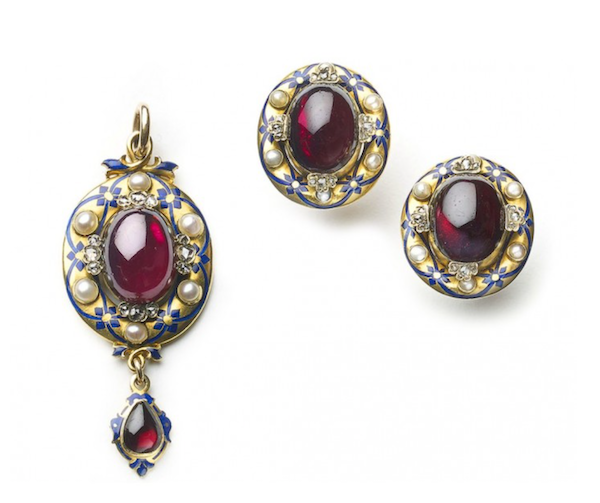 A Holbeinesque style Victorian pendant and earrings suite, set with cabochon garnets and rose-cut diamonds, with gold surrounds, decorated with blue, champlevé enamelled garlands, set with natural half pearls. The backs are engraved with foliage and flowers.There is a locket section at the back of the pendant, with woven hair, 1860-1880. Unsigned. Pendant approximately 65mm long, 25mm wide; earrings 25mm long, 22mm wide. The original earring fittings have been removed and replaced with clips and posts.

The Holbeinesque style was one of the early expressions of the Victorian Renaissance revival style, in favour from 1860 into the early 1900s. The style is typified by a centrally set cabochon gemstone, cameo or intaglio, mounted in gold and surrounded by opulently coloured enamel work, utilising techniques such as champlevé, basse-taille, en ronde bosse and cloisonné. Beneath this was suspended a gem set pendant. The back of each piece is often elaborately engraved using scroll and foliate ornamentation. The style was inspired by the work of the German court painter Hans Holbein the Younger (c.1497-1543). The designs were often copied from jewellery depicted in his portraits of ladies from the court of Henry VIII. Jewellers such as John Brogden and Carlo Giuliano crafted Holbeinesque jewels, along with jewellery houses including Jules Wièse, Boucheron, Chaumet and Vever. Holbein also left detailed drawings of pieces, some copied from his sitters' pieces, some of his own design.

A pair of Russian Gold and Diamond Earrings by Khlebnikov