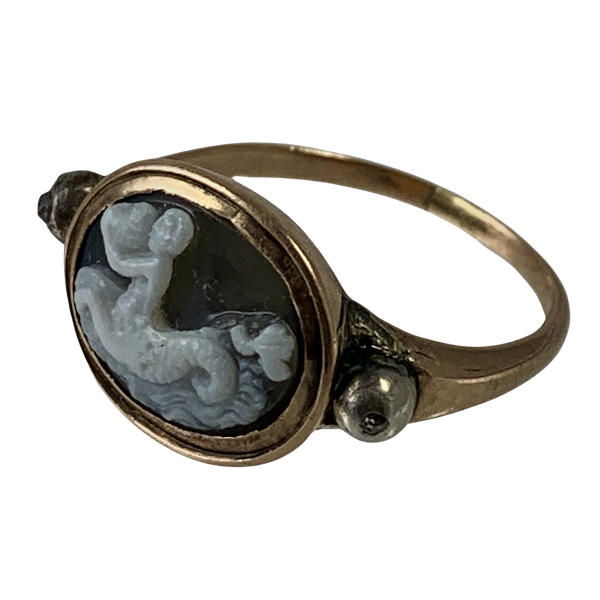 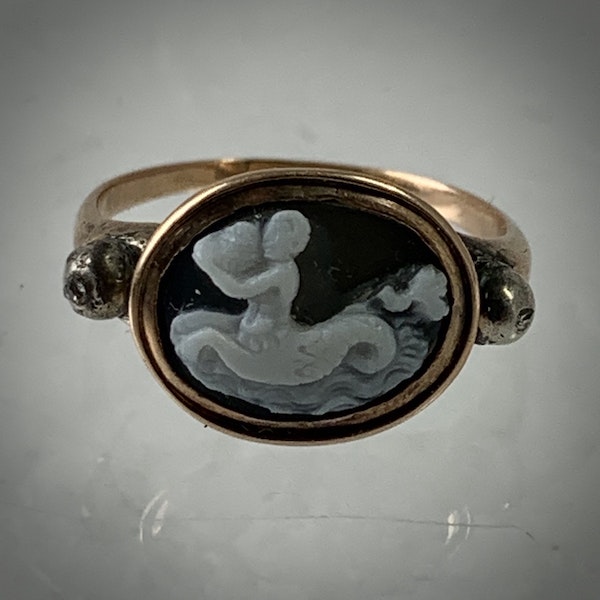 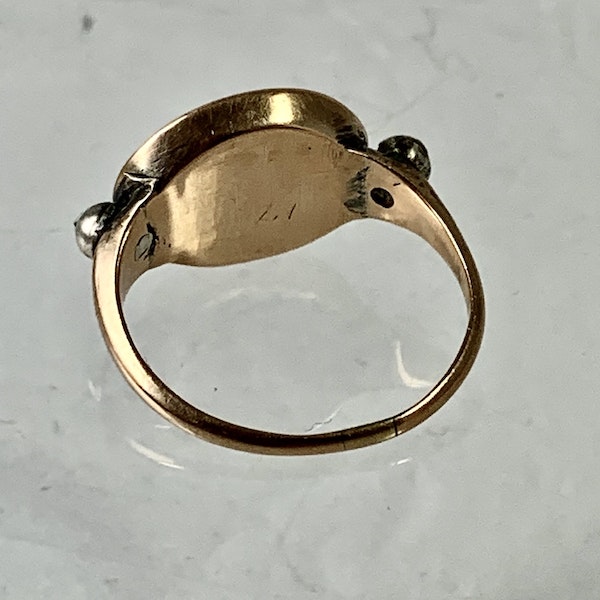 Ca 1580-1600 agate cameo of a merman / male equivalent of a mermaid /
The eighteenth century gold and silver ring is with two small diamonds in silver setting positioned on either side of the cameo.Perhaps the first recorded merman was the early Babylonian sea-god Ea, whose Sumerian Enki, and was known to the Greeks as Oannes. Oannes had a fish head and man’s head beneath, and both a fish tail and man like legs, according to Berossus.[a][1] The fish god Dagon of the Philistines, with a fish-tailed body, may derive its origins from these earlier Mesopotamian gods.[2]
Greco-Roman mythology[edit]
Further information: Triton (mythology)
Triton with a Nymph
Triton of Greek mythology was depicted as a half-man, half-fish merman in ancient Greek art. Triton was son of the sea-god Poseidon and sea-goddess Amphitrite. Neither Poseidon nor Amphitrite were merfolk, although both were able to live under water as easily as on land.
Tritons later became generic mermen, so that multiple numbers of them were depicted in art.[3][4]
Triton were also associated with using a conch shell in the later Hellenistic period.[5] In the 16th century, the Triton was referred to as “trumpeter of Neptune (Neptuni tubicen)” in Marius Nizolius’s Thesaurus (1551),[6][b] and this phrase has been use in modern commentary.[7] The Elizabethan period poet Edmund Spenser referred to Triton’s “trompet” as well.[8]
Another notable merman from Greek mythology was Glaucus. He was born a human and lived his early life as a fisherman. One day, while fishing, he saw that the fish he caught would jump from the grass and into the sea. He ate some of the grass, believing it to have magical properties, and felt an overwhelming desire to be in the sea. He jumped in the ocean and refused to go back on land. The sea gods nearby heard his prayers and transformed him into a sea god. Ovid describes the transformation of Glaucus in the Metamorphoses, describing him as a blue-green man with a fishy member where his legs had been.
Ring size : “L”