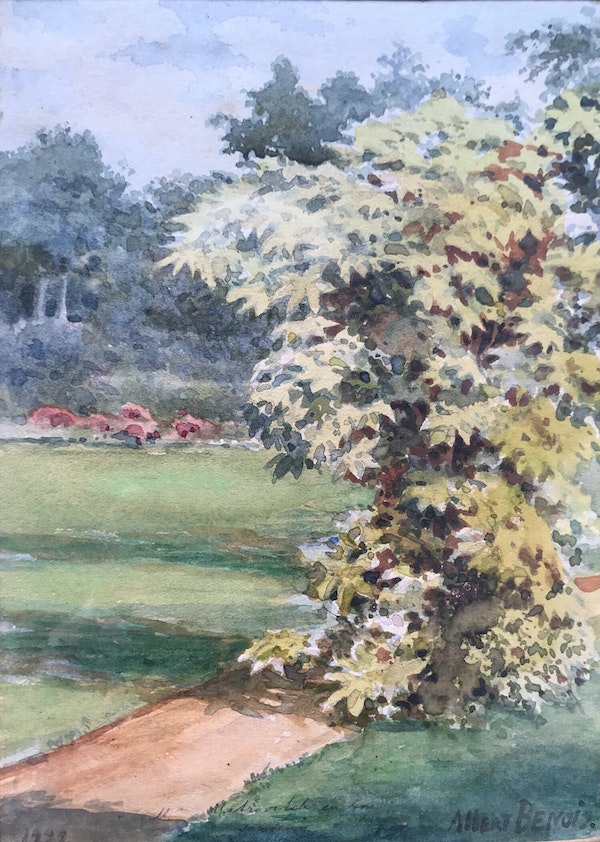 Albert Nikolayevitch Benois was a Russian painter and art teacher who specialized in watercolor landscapes.

He became a member of the Imperial Academy in 1890 and was appointed a Professor of watercolors in 1894; a position he held until 1905. He also served on the Academy's governing board. In 1895, he was appointed a curator at the Russian Museum.[ In 1903, he began working as co-editor at the art journal, Mir Iskusstva. During times off from teaching, he continued to travel; visiting North Africa and taking a trip through Siberia, Manchuria, Korea and Japan, among other places. He became Director of the Museum of Applied Arts (operated by the People's Commissariat of Trade and Industry) in 1918. Two years later, he accompanied an expedition by the Petrograd Institute of Geology to the northern coast where he produced a series of paintings.

His family included many notable figures in the arts. In addition to those mentioned above, the architect Alberto Cavos was his grandfather. The artist and theatrical designer Alexandre Benois and the architect Leon Benois were his brothers. He was also the uncle of painter Zinaida Serebriakova, and great-uncle of Sir Peter Ustinov. His grandson, Alexander Tcherepnin, was a composer and pianist of note. His son Nikolai was married to the opera singer Maria Nikolaevna Kuznetsova