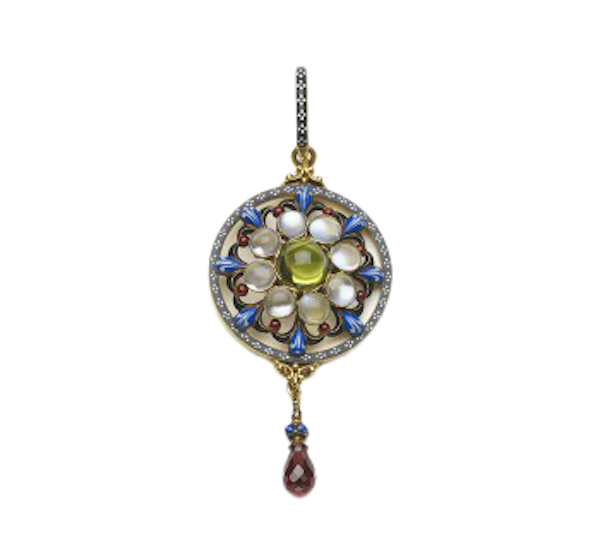 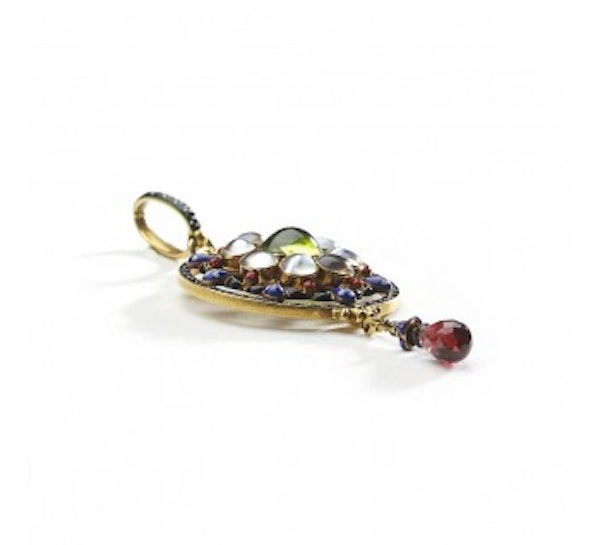 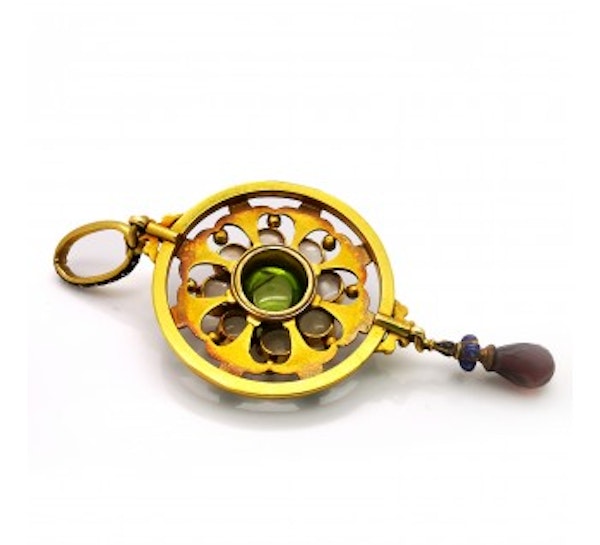 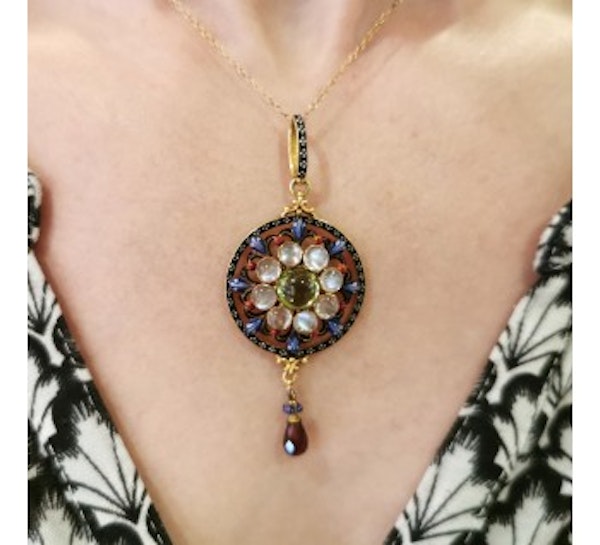 A Carlo Giuliano enamel, peridot, moonstone, garnet and gold pendant with a cabochon-cut peridot, in the centre of a cluster of eight, cabochon-cut moonstones, with a blue, white, black and red enamelled fleur-de-lys surround, bordered by a circle of white spotted black enamel, with a briolette-cut garnet pendant, with a black, blue and white enamelled cap and a black and white enamelled pendant bail, mounted in gold, circa 1885.

Carlo Giuliano (1831-1895) was a jeweller and goldsmith, born in Naples, Italy in 1831, it’s believed that Giuliano was trained in Alessandro Castellani’s workshop in Rome, and later sent to London to establish a branch of the Casa Castellani.

After leaving Castellani’s employment in the early 1860’s, Giuliano opened his own workshop manufacturing jewellery at 13 Frith Street in Soho. During this time, without a shopfront, Giuliano retailed his jewels through a number of established and well-respected jewellers such as Robert Phillips, C.F. Hancock, Harry Emanuel and Hunt & Roskell. Items produced for these retailers were sometimes “double-marked” with the C.G. Goldsmith’s Hall registered mark for Giuliano and the mark of the seller.

Giuliano’s early work took inspiration from archaeological jewellery, and focused on revivalist designs, carefully adapting them to suite the taste and fashions of the period.

In 1874, he branched out, opening a retail outlet at 115 Piccadilly, following it’s success, he closed the workshop on Frith Street in 1877, moving all production in-house to the Piccadilly premises. Specialising in Renaissance-style design, Giuliano was known for his craftmanship and the renowned pieces, decorated with beautifully detailed enamel, pearls and a wide variety of gems, preferring cabochons to the usual faceted stones, were highly regarded and attracted a varied and loyal clientele. His work was commissioned by Royalty such as Queen Victoria as a gift for her goddaughter Victoria Gray. This piece, along with many others from Giuliano’s collection, can be viewed at the Victoria & Albert Museum in London.

Carlo Giuliano died in 1895, leaving his business to his two sons, Carlo Joseph and Arthur Alphonse. They renamed the company Carlo & Arthur Giuliano, bearing the makers mark C & AG. The brothers continued to operate from the premises in Piccadilly until 1912, when they moved to 48 Knightsbridge. Sadly, two years later, the tragic suicide of Arthur in August 1914, bought an end to the company.