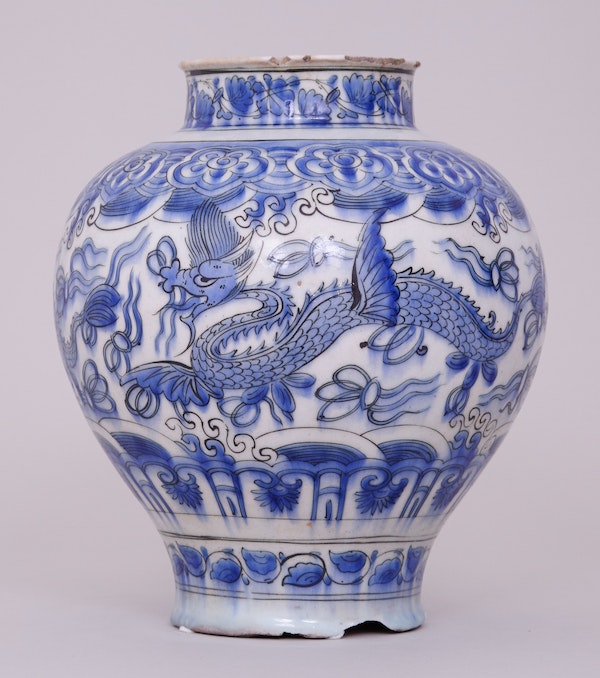 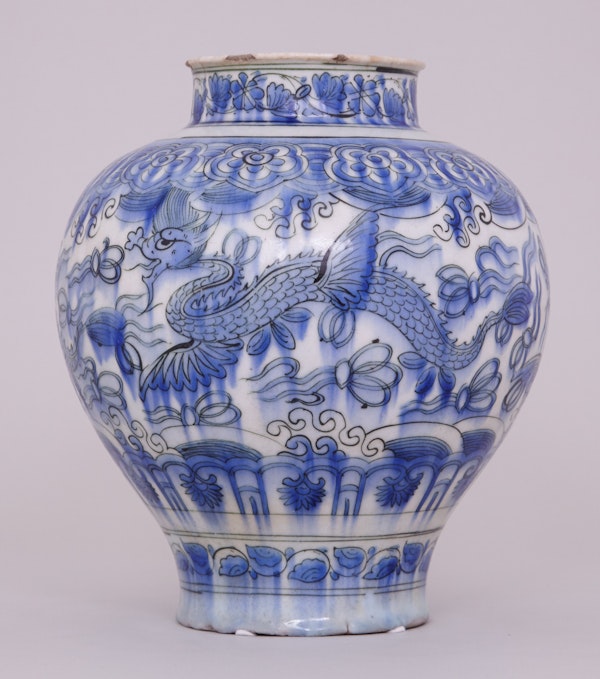 Of baluster form tapering to the foot and with a short rolled neck, painted in shades of blue and outlined in black in the Chinese-style with large scaly and winged dragons of fearsome miens stretching around the body of the jar and surrounded by ribboned motifs, all set between stylised crashing waves both above and below, a collar of flower-heads resembling ruyi-heads around the shoulder, a band of lappets painted with pendant flower-heads above the foot and a band of continuous flowering branches around both the foot and the neck, the base painted with a square mark resembling a Chinese pseudo-mark.

LITERATURE
This Safavid jar is based on 15/16th Century Chinese blue and white porcelain. In her catalogue of Safavid blue and white ceramics in the Victoria and Albert Museum, Yolanda Crowe discusses how, for a brief period only from about 1604 to 1617, Persian potters were able to “reproduce Chinese porcelain designs of almost imperial quality” (Crowe 2002, p. 56). One of the reasons for this was that the Safavid dynasty was experiencing a revival of its political fortunes. In 1604 Shah Abbas I (1587-1692) had defeated the old enemy, the Ottomans, and reconquered Azerbaijan. Building on a mood of triumphalism and resurgent nationalism, he endowed the Safavid ancestral shrine at Ardebil with numerous gifts including prized antique Chinese porcelains. Crowe concludes that, “it is conceivable that Persian potters felt challenged and demonstrated their own ability to produce pieces almost as impressive as the foreign ceramic gifts presented to the shrine.” (Crowe 2002, p. 56)

What one may also be able to deduct is that the Persian potters were most certainly working from specific Chinese examples from the shrine. This is particularly interesting in terms of our jar. There are a few illustrated examples of Safavid jars with dragons, for example there is a similar jar, also with an imitation Chinese square mark in black on the base, in the Victoria & Albert Museum, museum number 992&A-1876, and dated to 16th or 17th Century and another in the collection of the Louvre, reference MAO 695, dated to the beginning of the 17th Century. However, the dragons on both of these examples are not scaly and not winged. These might therefore have been based on examples in the shrine of Chinese ‘dragon’ jars produced both as early as during the Yuan period as well as in the Ming dynasty periods of Jiajing and Wanli and always boldly painted with clawed dragons.

What makes our jar particularly rare is that we have not found any other examples of Safavid porcelain with either scaly or winged dragons skimming over the top of crashing waves. Nonetheless, scaly and winged dragons do appear as a rare motif on 15th and 16th century blue and white Chinese porcelain. The winged dragon is then called ying long and sometimes feiyu and belongs to a group of winged or flame-propelled animals associated with the sea – commonly known simply as haishou or sea-creatures – who appear on porcelains of the Ming dynasty. It has been suggested that this was a reflection of China’s maritime supremacy in the early Ming period (see L.A. Cort and J. Stuart in Joined Colors: Decoration and Meaning in Chinese Porcelain, Washington, DC, 1993, p. 40). This might be the case, but these creatures also have a much earlier origin in the Shanhaijing or 'Classic of Mountains and Seas', which was a literary work revised by Guo Pu in the Eastern Jin period (AD 317-420), but which regained popularity in the early Ming dynasty. All of the sea-creatures seen on Ming porcelains can be identified from descriptions in the Shanhaijing (see Chen Ching-kuang, 'Sea Creatures on Ming Imperial porcelains', in Rosemary Scott (ed.), The Porcelains of Jingdezhen, London , 1993, pp.101-22). These appear as a group on 15th century imperial porcelain and on those of the Wanli reign.
The Ming Shi (Dynastic History of the Ming) mentions a creature called a feiyu, literally 'flying fish', in juan 67, while the Ming dynasty writer Shen DeFu (1578-1642) appears to suggest that the feiyu only came into existence in the Ming dynasty (see Shen Defu, Wanli Yehuobian, appendix 2), describing it amongst the nine troublesome children of the Dragon King.

Whatever its origins the winged dragon appears in variants of two forms on Ming dynasty porcelains; one form has feathered wings, like a bird, and the other has wings like a bat. The second type appears on Jiajing porcelains. Three Jiajing blue and white porcelains in the collection of the Palace Museum, Beijing, decorated with winged dragons have been published - a dish, a jar and a cup (see The Complete Collection of Treasures of the Palace Museum 35 Blue and White Porcelain with Underglaze Red (II), Hong Kong, 2000, p. 66, no. 61; p. 101, no. 94; and p. 149, no. 138).

The appearance of winged dragons on large vessels, such as fish bowls is very rare. A large Xuande marked (1426-35) fish bowl in the collection of the Percival David Foundation is decorated with winged dragon amongst waves (see illustrated Catalogue of Underglaze Blue and Copper Red Decorated Porcelains, Percival David Foundation of Chinese Art, London, 1976, p. 25, no. 655 and pl. II, where it is incorrectly labeled no. 656). The winged dragon on this David Foundation early 15th century fish bowl has feathered wings. However two late 15th century large vases, one in the Victoria and Albert Museum (see Rose Kerr, 'Object of the Month', Chinese Ceramics - Selected articles from Orientations 1982-2003, pp. 134-6) and one in the Musée Guimet (see Daisy Lion-Goldschmidt, Ming Porcelain, London, 1978, fig. 85) are decorated with dragons with more bat-like wings amongst clouds above turbulent waves.

The wings of the dragons on our Safavid jar are decidedly bat-like, leading to the assumption that the Persian potter must have taken his inspiration from a very particular example of Chinese porcelain belonging to this rather small group of either late 15th Century models or Jiajing porcelain copying the 15th Century style. All together an extremely rare vase copying another extremely rare vase.