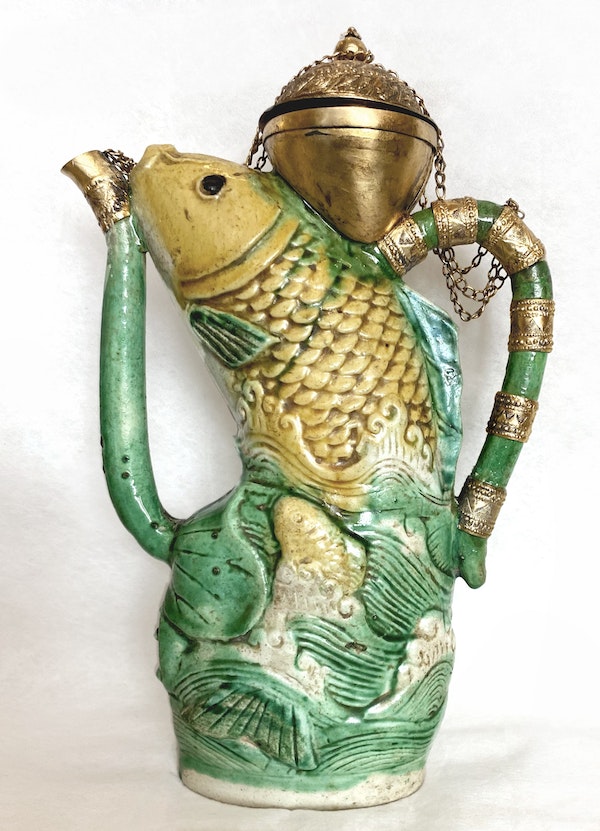 Modelled in the shape of a carp leaping from lively cresting waves, two further small fish swimming alongside, set with a slender loop handle and spout, expressively glazed on the biscuit in splashes of green, yellow and white, with the spout, handle, fins, and the lily pads on the base all detailed in green, and the body of the carp in yellow, the eyes in brown enamel, the scales well defined, set with metal mounts to the handle which is formed as an upturned lilly, the base unglazed.

LITERATURE
There is an example in The Hainhofer Cabinet, at Museum Gustavianum, Uppsala Sweden which is illustrated by Jan Wirgin, "Från Kina till Europa", Stockholm 1998, page 30. This is of a lobster enamelled on the biscuit in the same colours as our carp. This example from the Hainhoffer Cabinet together with other zoomorphic ewers were presented by the city of Augsburg to King Gustavus Adolphus of Sweden in 1632. The lobster is also illustrated in Hobson, R.L. The wares of the Ming dynasty. 1923. see page 147, plate 36.

For a further sancai ewer of lobster form also dated to the Ming dynasty (c.1573 - 1620), museum number 1931,0717.1 (click here to view). This object is published in Harrison-Hall (2001) Catalogue of Late Yuan and Ming Ceramics in the British Museum, pp.15-16, where the author notes that: 'Variations on this type of ewer, with carp in place of the crayfish, are also known'. In the British museum version the spout of the lobster is also formed as an upturned lotus flower and also has a cup on the top of the handle as our one.

As early as 1590 related ewers were presented to the Elector of Saxony by the Duke of Florence, and in 1628 the collection at Dresden contained two ewers, one in the form of a lobster or crayfish and the other of a phoenix.

The carp is a symbol of endurance and achievement, as it swims against the current, hence its connection with the successful student.