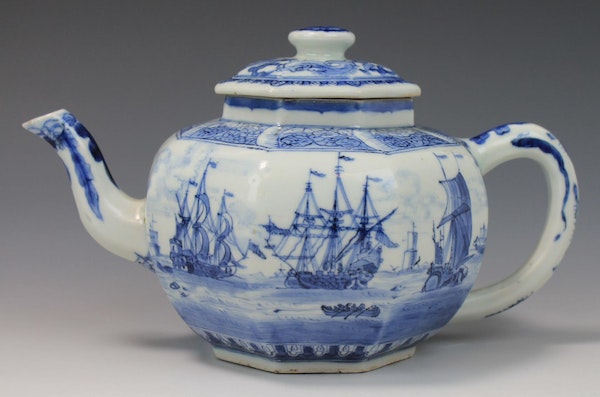 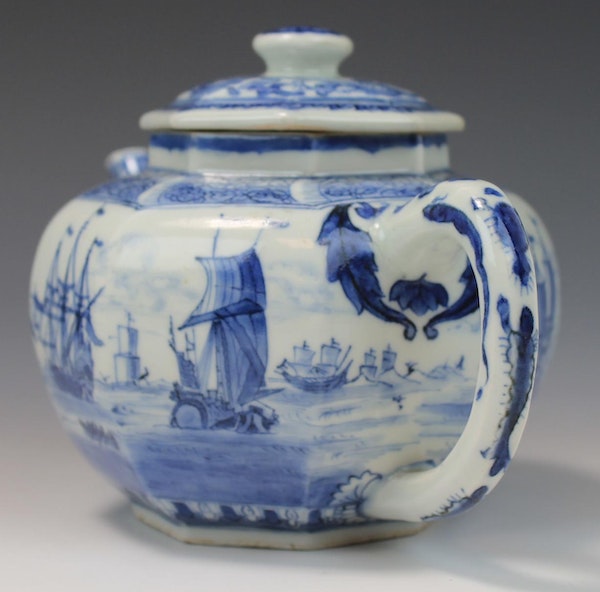 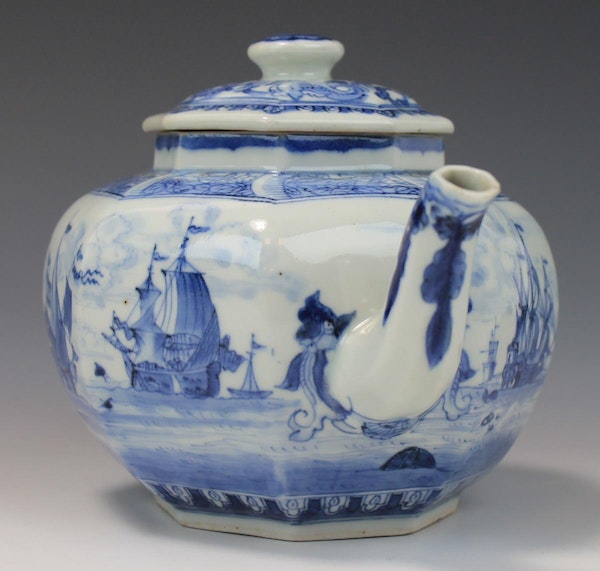 Japanese Arita blue and white teapot, Edo Period (1603-1868), early 18th century, of octagonal form with octagonal footrim, decorated in underglaze cobalt blue with a seascape, with European ships and a small rowing boat containing figures in the foreground, the neck with four panels containing flowerheads, the curved handle with spiny sea creatures, the lid of dome-form with dolphins and border of stiff leaves, the base with Chenghua mark.
Height: 12cm. (4 6/8 in.), length: 19cm. (7 1/2in.)
Condition: two small hairlines, firing fault to inside of lid, very slight wear to end of spout.

A similar teapot can be found in the collection of the Groninger Museum, Groningen (1983-96), and is illustrated in Jörg, Christiaan J.A., Fine and Curious: Japanese Export Porcelain in Dutch Collections, Hotei, 2003, illus.321.

The Sakoku policy of the Tokugawa Shogunate has frequently been misrepresented; far from being closed off to the outside world, eighteenth century Japan enjoyed a healthy circulation of imported commodities including European prints: the scene depicted on this teapot likely drew inspiration from one such print on a naval theme. Arita, the centre of Japanese porcelain production where this teapot was manufactured, is conveniently located close to the port town of Nagasaki, where Dutch and Chinese ships did their trade. The European sailing ships were markedly different from the Chinese junks or Japanese vessels to which people were accustomed, and so aside from facilitating trade, these comparatively massive seacrafts captured the imagination of many Japanese artists and writers who saw them as a symbol of Western technology and oddity (Japanese entry to the ships was prohibited by Shogunal authorities). Consequently, Western ships feature in many contemporary sketches, prints and books, though their appearance in porcelain design is rarer.