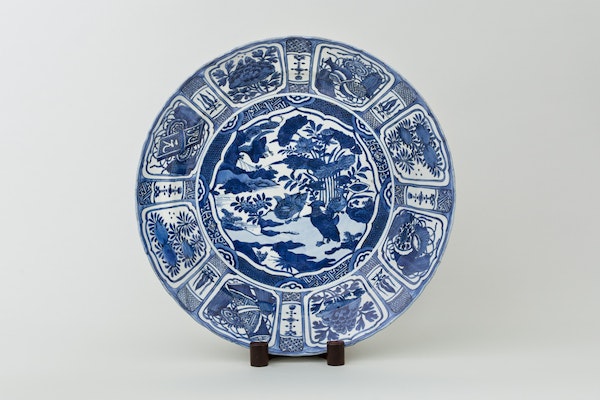 Of circular form, decorated in underglaze blue with in the centre ducks-in-a-pond motif, the birds finely painted with the their wings and feathers well-delineated, large branches of detailed lotus growing nearby with large flat leaves, a flowering lotus and a lotus-pod, the scene enclosed within a border decorated with alternate key-pattern, fish scale pattern and white flower-heads on blue grounds, and divided by ju-i heads, the wide rim with eight large panels decorated with auspicious objects like a double gourd and tassels, scrolls and books alternated with stylised sunflowers, each shaped panel separated by narrow bands decorated with beaded tassels or small up-right Artemisia leafs and scroll-work, the back with a further eight stylised panels divided by narrow bands.

PROVENANCE
From the collection of Herbert Küttim.

Herbert Küttim was an entrepreneur working in many different fields. It was during a trip to London in the 1950´s that his passion for porcelain began. During the following decades he travelled many times to London, filled his blue Chevrolet with antique porcelain, which he brought back to Sweden. Some was kept in his own collection, other pieces were sold on. His sons - who often accompanied him on his journeys to England - and his grandchildren inherited this collection.