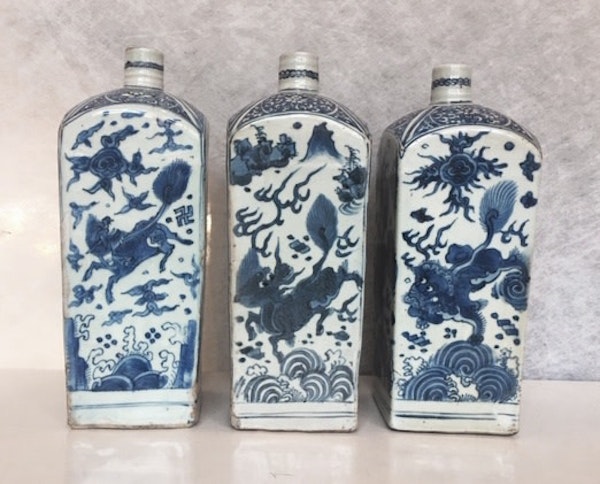 Of square section, the four straight sides rising to domed shoulders, set with a short and narrow cylindrical ridged neck, decorated in shades of underglaze blue, each side painted with a fantastical Kylin flying above stylized crashing waves and among assorted auspicious symbols including the Chinese character 'wan'; the shoulder decorated with lotus scrolls reserved in white on a blue ground, the neck with a band of scrollwork, a double line around the foot, the base unglazed.

LITERATURE
The form of this bottle is modelled on European glass ware, while the decoration of Kylins is very typically Chinese. Square bottles such as this were originally made for storing alcohol on long sea voyages. Their shape made them easy to stow and less likely to break. The ridge on the neck imitates a screw mechanism.

Three similar vases are illustrated in Harrison-Hall, Jessica, Catalogue of Late Yuan and Ming Ceramics in the British Museum, London, BMP, 2001. They are all in the collection of the British Museum, London, museum number 1928,0718.6, 1960,0721.1, and 1963,0520.6 respectively. The latter vase also features a design of Kylin above stylized waves, flying among auspicious 'wan' ('all-encompassing good') characters.