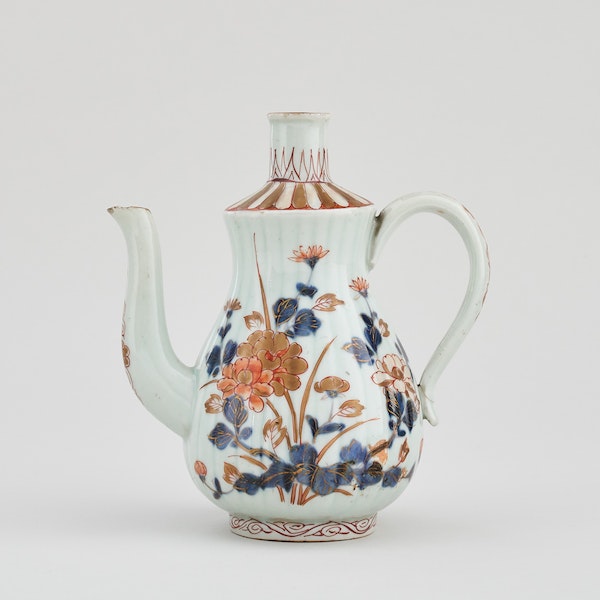 Of pear shape with a ribbed body, short tubular neck, c-shaped handle and curved spout, painted in underglaze blue and shades of overglaze iron-red and gilding with on the body large flowers and tall grasses issuing from the ground, the flattened shoulder with lappets and upright triangle-work around the tubular neck, the handle painted with a stylized flower and scroll-work, the spout similarly decorated, a band of scroll-work around the short foot-ring, the base with several stickers attached.

PUBLICATIONS
John Ritchie Findlay (1824-1898) was born in Arbroath, Scotland, educated at Bathgate Academy and Edinburgh Academy. He joined the Scotsman Newspaper, founded and owned by his great uncle, John Ritchie. In 1863, he married Susan Leslie, mother of his ten children.

He became a partner in the paper in 1868 and on John Ritchie's death he inherited the Scotsman. As its proprietor until his death in 1898, he increased the circulation considerably and became a very rich man. Much of this was spent on philanthropic causes. In 1889, he gave the Scottish National Portrait Gallery to the nation.

He built No 3 Rothesay Terrace, a magnificent Edinburgh town house and also owned Aberlour House and its estate in Banffshire. He was a noted collector of Chinese and Italian porcelain and works of art.