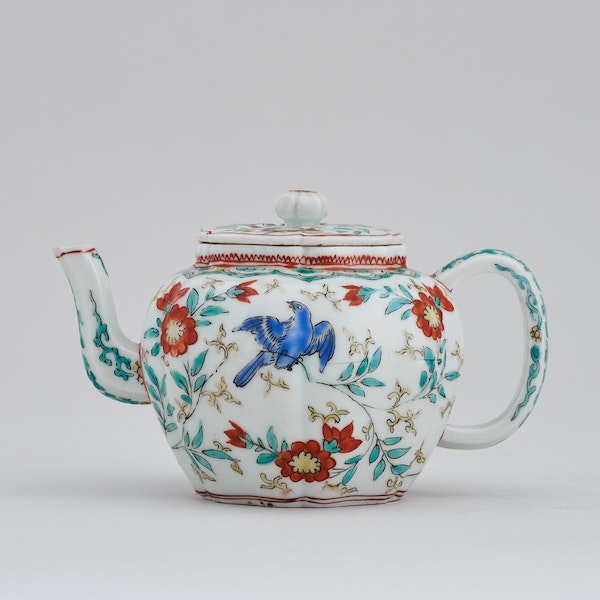 The decagonal lobed teapot and cover decorated in iron-red, blue, green, yellow and black enamels with a blue bird with outstretched wings perched in a branch amidst flowers and foliage, beneath a ruyi and dentil border, the wide rounded handle and the short curved spout with karakusa and yellow flowers, the fitted cover similarly decorated, the finial in shape of a flower bud.

LITERATURE
There is an almost identical example in the Ostasiatiska museet, Stockholm dated c.1680-1700, museum number OM-1987-0122. For another similar example, see Hayashiya Seizo, Nihon no tori [Japanese ceramics], vol. 9, Kakiemon (Tokyo, 1974), no. 71. For an Arita blue and white version in the Prinsenhof Museum, Delft, see C.J.A. Jörg, Fine and Curious, Japanese Export Porcelain in Dutch Collections (Amsterdam, 2003), p. 193, no. 240; and see Jörg's Fine and Curious, no. 241 for a coloured example, too.


The Japanese potter Kakiemon Sakaida (1596-1666) is popularly credited with being one of the first in Japan to discover the secret of overglaze enamel decoration on porcelain, known as 'Akae'. The Kakiemon kiln, in the Japanese town of Arita on the southern island of Kyushu, was founded in around 1670 and specialised in the production of these wares that were typically decorated with a yellow, red, blue and turquoise palette set against a milky-white ground. After the fall of the Chinese Ming dynasty in 1644, Dutch traders began to import Kakiemon porcelain to Europe where it became extremely popular. This eventually led to the imitation of Kakiemon patterns onto cheaper white porcelain produced in Europe, namely at the Chantilly, St Cloud, and in England at Bow and Chelsea.

This elegant teapot was probably made specifically for export to Europe, where Kakiemon wares were the most highly desired of all Japanese wares. There are no records of teapots such as this in the lists of porcelain shipped to the Netherlands by the VOC, which suggests that it was bought privately by special commission. The dainty proportions of this teapot can be accounted for by the costliness of tea in Europe in the 17th century, where it was truly a luxury item.