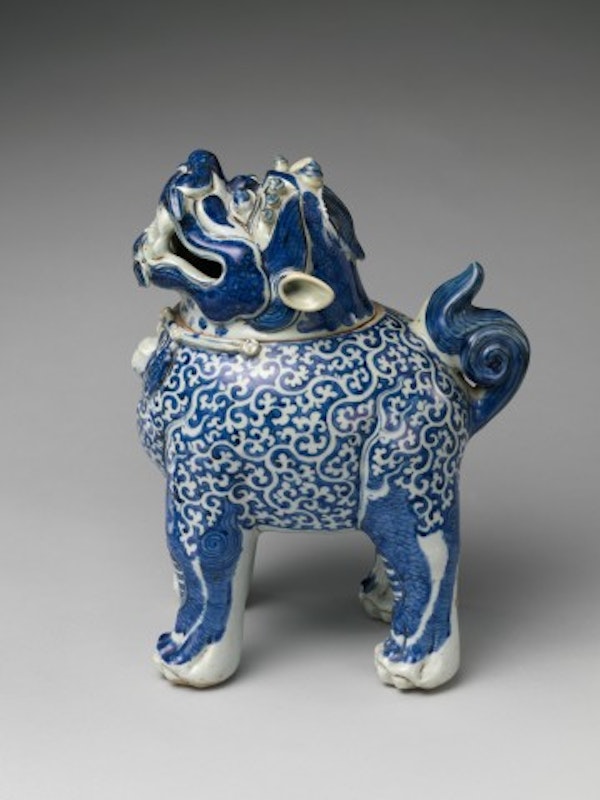 The mythical creature modeled four-square, the body painted in shades of underglaze blue with foliate scrolls and flames, the neck with a collar suspending a bell, a curled tail to the rear, the cover in the form of the head, mouth with bared teeth, bearing all supported on four scaly legs with clawed feet.

LITERATURE
This object is now on view in the collection of the Metropolitan Museum of Art, New York, accession number 2018.154a, b.

It is one of a small group of objects modeled in the form of luduan that were produced during the Wanli period (r. 1573-1620). Luduan are auspicious creatures that are able to travel vast distances in a short time and can speak all foreign languages. They are said to appear only when a virtuous leader is on the throne.

Censers in this form were produced in bronze as early as the Han dynasty (206 BC- 220 AD), - see one in the Bondy Collection, illustrated in the Berlin Exhibition of Chinese Art, Berlin, 1929, cat. no. 45. These bronze prototypes inspired later ceramic versions, such as the present.

Intricate porcelain modeling tends to become distorted during the firing process. As a result, few censers of this large size and form are known, however one was included in the exhibition Chinesisches Porzellan der Mingdynastie. 14. Bis 17 Jahrhundert, Zwinger Museum, Dresden, 1987, cat. no 3767.