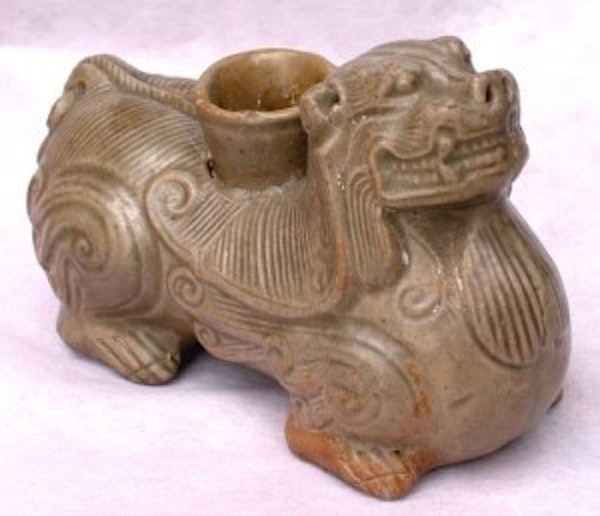 Modelled as a crouching lion with head raised and a trumpet-shaped aperture to the back, covered overall in an olive-green glaze.

PROVENANCE
This is illustrated and catalogued in Chinese Ceramics in the Carl Kempe Collection, Stockholm, 1964, by Bo Gyllensvard, pl 16, where it is described as 16. Candlestick in the shape of a crouching lion with a holder on his back. Carved and incised details. Yueh yao. Found at Shao-hsing, Chekiang. Height 80 mm, Length 126 mm, Six dynasties (220 to 589 AD).It is also illustrated together with our candlestick, AW36, on p. 28 where they are photographed together

LITERATURE
According to Bo Gyllensvard in Chinese Ceramics in the Carl Kempe Collection, these candlesticks probably come from a site discovered by and written about by A.E. Brankston, Yueh-ware of the Nine Rocks kilns, The Burlington Magazine, Volume LXXIII, December 1938.


For a very similar example of a lion candlestick in Yueh ware from the Cuncliffe Collection, see plate 9b, p 49, G. St. G.M. Gompertz, Chinese Celadon Wares, Faber Monograph series, London, 1980, Revised Edition. Gompertz questions if this was indeed a lion candlestick or could have been a water vessel. Gompertz also refers to a poem composed by the Tang poet Hsu Yin, in appreciation of Yueh ware and we quote:
Like bright moons cunningly carved and dyed with spring water:
Like curling disks of thinnest ice, filled with green clouds:
Like ancient moss-eaten bronze mirrors lying upon the mat:
Like tender lotus leaves full of dewdrops floating on the river-side.