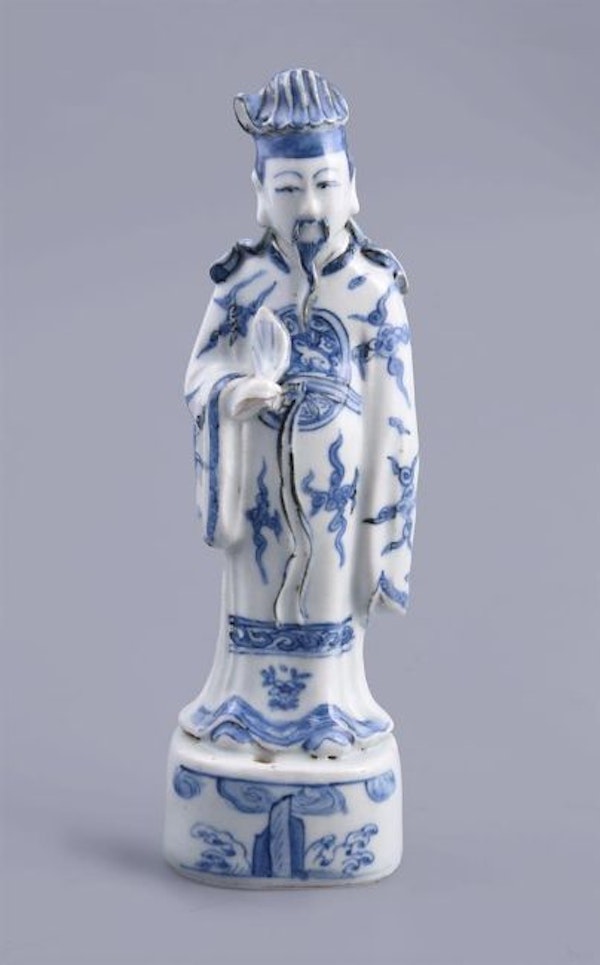 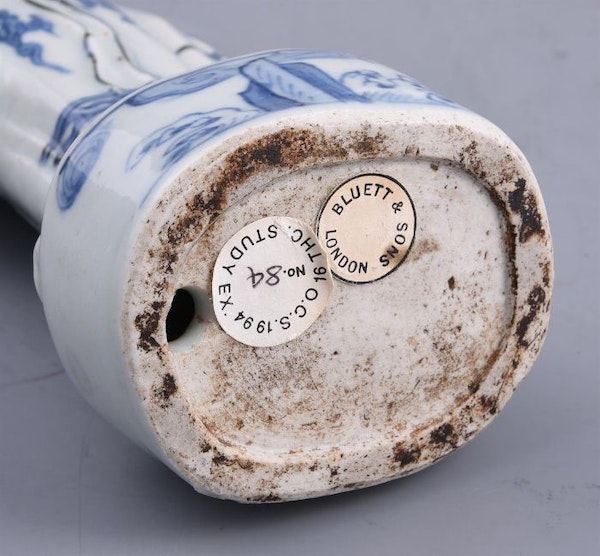 Chinese blue and white figure of Zhongli Quan, Ming (1368 – 1644), late 16th/early 17th century, in flowing robes with a central badge containing the moon rabbit, one of the twelve ornaments; standing upon a base decorated with the sacred mountains; height: 22.5cm. (8 7/8 in.)
One of the Eight Immortals, a group of semi-historical Daoist figures who appear in ceramic and art design through Chinese art history, Zhongli Quan is said to have obtained the secret of the elixir of life, and the fan which he is often seen carrying is said to revive the souls of the dead. The insignia on his robe reflects this ability: the moon rabbit is one of the twelve auspicious ornaments which were employed in the decoration of fabrics worn by authority figures, and portrays a rabbit constantly pounding the elixir of life within the moon. One of the first documents detailing the twelve ornaments was the ‘Records of the Grand Historian’ (shiji), a history of ancient China by the Western Han official Sima Qian (c. 145 – c. 86 BC). Standing figures of Zhongli Quan are very rare, one other example can be found in the Hallwyl Museum, Sweden (inventory number XLVIII:VII:C.b.b.01.).
Provenance: With paper labels to the base for both Bluett & Sons and the joint 1994 OCS and British Museum Exhibition (no.84). Purchased at Bluett & Sons on 9th September 1963 for £85 by John da Silva (1918 – 2003) and Jennifer da Silva (1932-2020) and thence by family descent. Exhibited in the OCS exhibition in October 1963 (no.100) and at the joint OCS and British Museum exhibition October-November 1994 (case 2a, no.84), illustrated in handlist for the exhibition.
The figure was purchased by Mr and Mrs da Silva as a wedding present; as recorded in the former’s family notes: 'two old and close friends invited us (Mr and Mrs da Silva) to choose something at Bluett's, the best and nicest of oriental dealers, as a wedding present, and after much deliberation we selected a 16th century blue and white figure of Zhongli Quan, one of the eight Daoist Immortals.'