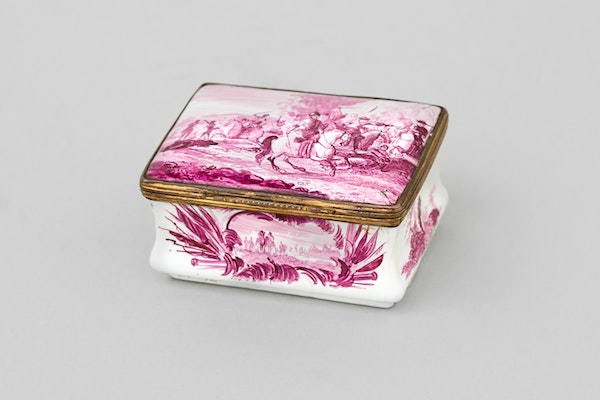 Of rectangular form finely painted with great detail and clarity in shades of crimson on a white ground, the lid exterior with a stirring battle scene including men on horseback and on foot engaged in armed combat, swords and staves held aloft, pennants fluttering, in the sky the ominous cloud of gun smoke rising from the battleground, the interior of the lid with a calmer scene on the battlefield, men conversing in front of tents or strolling around, on the left a tree stump is all that remains of what must once have been, before the battle, a fine tree, the concaved sides on a stepped base painted with further scenes of the departing armies, viz, at the front and the back of the box, two scenes framed by furled banners, of men on horseback and on foot leaving the scene, at the left hand side, two figures in a rocky landscape, on the right hand side a single figure in a rocky landscape, the base of the exterior with a three soldiers in a woodland landscape, the rims edged with gilt bands and hinged along the longest edge.